SUNTZUDO FACEBOOK GROUP
The Art of War for Today 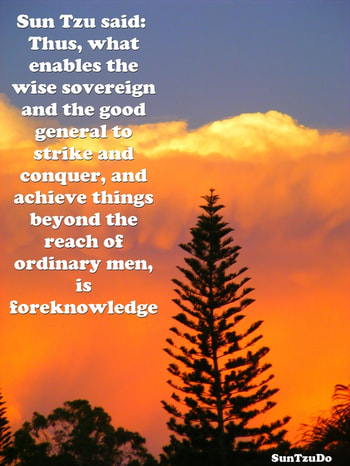 Sun Tzu said:  Thus, what enables the wise sovereign and the good general to strike and conquer, and achieve things beyond the reach of ordinary men, is foreknowledge.
Now this foreknowledge cannot be elicited from spirits; it cannot be obtained inductively from experience, nor by any deductive calculation.
Knowledge of the enemy's dispositions can only be obtained from other men.

The first keyword here is foreknowledge, the second is men. Foreknowledge can be understood to be an awareness of something before it happens or exists. It can be something as obvious as the sun will rise tomorrow and it will rise in the east and set in the west. A pretty mundane and not overly helpful except to give a peace of mind that tomorrow the world will not end. On the other hand, if we knew the winning numbers for the lotteries for the next year, then we have a game changer. The urge for us to have this foreknowledge is clearly seen by weather forecasts are shown by all television station and radio stations have hourly updates. The popularity of horoscopes is also evidence of the innate desire of many to get a ‘jump’ on the future. Foreknowledge is how we use the promise of tomorrow to change or continue what we do today.

This is at one end of the rainbow, at the other end, foreknowledge can be the most powerful factor between victory and defeat, between success and missing out. There is an old saying: ‘forewarned is forearmed’. In essence if you know something is going to happen you can prepare for it. If you are the only one who knows it is going to happen, you are in a very powerful position. Not knowing can be a bliss right up until it bites you. The ultimate test of foreknowledge is whether you would like to know the exact time, place and manner of your death. Not everyone wants to know these details.

A classic example of foreknowledge is the past scandals of insider trading of the late 1970s and 1980s. The movie Wall Street was premised on insider trading and included a quote from the Art of War. Take the Ivan Boesky scandal. In 1975, Ivan Boesky opened his own firm, the Ivan F. Boesky & Company, with $700,000 in seed money from his wife’s family with a business plan of speculating on corporate takeovers. Boesky's firm grew from profits as well as buy-in investments from new partnerships. By 1986, Boesky had become an arbitrageur (the practice of taking advantage of a price difference between two or more markets: striking a combination of matching deals that capitalize upon the imbalance, the profit being the difference between the market) who had amassed a fortune of more than US $200 million by betting on corporate takeovers. A group of partners in 1987 sued Ivan Boesky over what they claimed were misleading partnership documents. The U.S. Securities and Exchange Commission investigated him for making investments based on tips received from corporate insiders. These stock acquisitions were sometimes brazen, with massive purchases occurring only a few days before a corporation announced a takeover. Although insider trading of this kind was illegal, laws prohibiting it were rarely enforced until Boesky was prosecuted. Boesky cooperated with the SEC and informed on others, including the case against financier Michael Milken. As a result of a plea bargain, Boesky received a prison sentence of 3.5 years and was fined US $100 million. The amounts of money involved indicate the power of foreknowledge and its power if it is used correctly. Boesky had to use the insider tips within a set time period to maximise his profits however by doing so it made it possible to prove his insider trading. The skill of using foreknowledge, of knowing what should and should not be used is not as simple as it may seem. He operated on the belief that his type of trading was rarely prosecuted, however he did not allow for a time when they would be.

So there are two parts to foreknowledge, having it and using it to best advantage. You can give the information away, act on it or ignore it, sell it or keep it secret and use it solely for your own benefit. During school, we all knew when and what exams we had to deal with. Some used this information wisely and adopted a study plan while others did not. Not as sexy as the Boesky tale but one all of us lived through. What not all of dealt with is the case of being offered the answers before the test. Would you have taken the risk of buying this foreknowledge? If you had bought the answers, would you then have shared them?

The knowledge to pass the test for a drivers’ license is freely available to all. The information is made and promoted publicly, the skills required are clearly laid out and there countless businesses to train anyone who so desires to learn and pass the test. Yet so many fail to pass not just on their first attempt but several attempts. When you consider that this a life and death situation you can clearly understand that not everyone understands how to use foreknowledge correctly or even understand its’ significance.

The second sentence deals with how to acquire this knowledge. Inductive reasoning (as opposed to deductive reasoning or abductive reasoning) is reasoning in which the premises are viewed as supplying strong evidence for the truth of the conclusion. Too many start with a result and then justify their behaviour or lack of action and understanding. Having a goal is not the same as accepting an outcome and then justifying the outcome. To the contrary, one needs to see and judge what available and what is an obstacle to a preferred outcome, then decide how to progress. Life will teach sooner or later, that people can justify anything.

Acquiring this foreknowledge is a skill, a skill that has to be deliberately and intelligently developed. Simply growing old is not enough. We all have our inspirations, rock stars, sports heroes or others. Every successful person started out knowing nothing and having to develop the skill to find, understand and then apply the knowledge or information they needed to succeed in their chosen field. Relying on omens, portents and Heavenly intervention is simply not enough over the long term to be successful. To be successful, you need to put yourself into situations where you can succeed and avoid situations that reduce your chances to succeed. Steve Jobs did not wait for someone else to invent the Apple Macintosh computer or the iPad or the iPhone. He studied the computer world and developed his own solution.

The third sentence tells where to go to make the learning process easier, not easy, just easier. Humans have been around for a very long time and yet we still have to deal with the same issues and problems that have been faced and overcome for over two millennia. Eons ago, knowledge was restricted to very select and very small elite group. Nowadays we live in a flood of information of biblical proportions. The challenge of finding the specific knowledge we need or desire is still as critical and difficult as it has ever been. Instead of dealing with a drought we face a flood.

During World War Two, the British Prime Minister Winston Churchill had to agonise over a particular piece of foreknowledge. It has been recorded that Winston Churchill knew that the city of Coventry had been targeted by the German air force to be bombed, Churchill received this knowledge because the Allies had cracked the German military code called ‘enigma’. If Churchill had tried to evacuate Coventry, the Germans would realise that their code had been compromised and so would change it. As it had taken a phenomenal effort to crack it in the first place and would save countless lives else, it is believed that Churchill decided to sacrifice the city ‘for the greater good’. Some revile Churchill for making such a decision and other hail him for such a courageous decision. What would you have done, if you were in the shoes of Churchill? His decision has been compared if you knew that the spouse of your friend is having an affair, do you tell your friend?

The vital piece of knowledge that is obscured is that we need others. No-one has ever succeeded alone, they have always had help along the way. To succeed, Sun Tzu says we need others. Ever wonder why there is a whole chapter devoted to spies. This is why. It highlights the need to know how to acquire information and assess that the information is valid, timely and how to use it. He tells us that we need ‘a certain intuitive sagacity’ to deal with all the information that comes our way every minute of every day. This is where you learn that the ability to use foreknowledge is a skill and not a fancy. All knowledge comes from other individuals. From teachers, parents, friends, reporters, heroes and stars. People just like us. Books, newspapers, websites, movies and other visual sources of foreknowledge must be created and posted by people. Created and posted by people just like us. We all know things that for us is mundane, even ordinary, yet to someone else it can be the foreknowledge that can change their lives. Years ago, I researched, wrote and posted fundraising articles on fundraising activities and fundraising in general. The greatest surprise was discovering that fundraisers I had been involved in and considered boring and needed to be replaced were exciting new ideas in other countries who had not heard of the fundraisers we were running. There was one lady in America who was becoming very unpopular because every fundraiser she ran lost money and was at her wits end of how to turn her situation around. For years we had been running 50/50 raffles. In this kind of fundraiser all you need to invest in are books of raffle tickets. The idea is that the winner gets fifty percent of the money from the sold tickets and the fundraiser keeps the other fifty percent. I have never heard of anyone losing money with this fundraiser. The lady was overjoyed and used the fundraiser. As it was a new idea in her part of the world she raised a lot of money before other fundraisers in her area also started using this fundraiser.

Other regular every day instances of how having foreknowledge effects our everyday lives are applying for college, universities, jobs, promotions and home loans. We go to school to learn the basic information or foreknowledge to prepare us for these events and yet education is so poorly dealt with in our fast paced, information dependent lives.

We learn the alphabet to learn how to read. We learn to read so we can study. We study so we can learn how to acquire, assess and use the foreknowledge Sun Tzu speaks of. Knowledge is great however to have this knowledge before those around you is invaluable and places you in a very powerful position. To consistently be in a situation where you have knowledge before anyone else is also a skill. It has to be recognised and developed. The ability to read and write at a higher level than those in our early classes is a powerful advantage. This advantage does not last forever. Knowing how to acquire, assess and use foreknowledge is an advantage that lasts a lifetime.