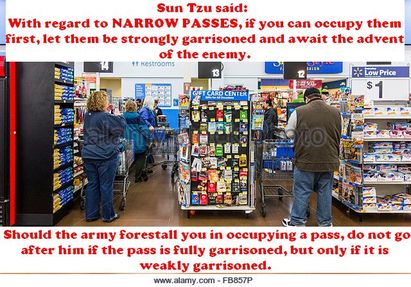 10.8. With regard to NARROW PASSES, if you can occupy them first, let them be strongly garrisoned and await the advent of the enemy.
10.9. Should the army forestall you in occupying a pass, do not go after him if the pass is fully garrisoned, but only if it is weakly garrisoned.

These two lines show up in our lives so often it can cause us loads of grief yet many are completely unaware that they exist other than on the pages of a book. Examples of everyday encounters with the phenomenon of narrow passes are as follows: checkout aisles in shopping centres, trains and buses getting to and from work, traffic jams also getting to and from work, classrooms for students, timetables and deadlines, awkward pauses in conversations, elevators and escalators, fridges and clothes and the ever present and indispensable smart phone. Checkouts packed with last minute or impulse buys are a great example of a ‘narrow pass’ being ‘strongly garrisoned.

Relating the idea of narrow passes to a geographical feature was the original intent of the author and is pretty easy for anyone to do. However, the real challenge is to understand how and where the principle applies in all the other circumstances where we face such powerful places and even situations. We are not genetically pre-programmed to convert ideas applying to ancient geographical situations to modern scenarios. It takes commitment, perseverance and patience.

Time and patience are definite requirements to improve in applying this passage successfully however when you get it right it can produce fantastic results.

Jim having problem communicating with boss, they seemingly did not see eye to eye on anything. The situation had developed that Jim avoided as much contact with his boss, Jack, as he could get away with. Meetings between the two only ever happened in the boss’s office and they were short, formal affairs. Jim wanted to keep the pain to a minimum so he could keep his job. Even though he was very unhappy and frustrated.

While watching a sports game and listening to Jim vent his frustrations yet again, Jim stated he was willing to do anything to deal with situation. This was the opening I was waiting for. If this was the case I told him, there were things he could try. Things that he would not immediately believe would help but if he followed certain steps, his situation would improve. I was not offering a cure all, but his situation would improve. Jim accepted and promised to put his scepticism aside for the duration of my assistance.

The first thing Jim had to understand that by only meeting his boss in his office he was deliberately placing himself at a great disadvantage by only meeting his boss in the boss’s office. This was his castle, his strongest space and in here Jim was at his weakest. By request Jack described the office. His boss sat in a huge chair with a high back, directly facing the door. His desk was large as well. On the wall were photos of the boss with important individuals within and without the company. There was a shelf with sports trophies and framed academic achievements and certificates of appreciation and support from various social groups. No wonder Jim felt intimidated and mostly powerless whenever he entered this office. Clearly he was entering a narrow passage and it was heavily garrisoned.

The first step was to get Jim educated, so I loaned him a book on body language by Alan Pease. In this book Alan, describes in detail, not just body language but other subconscious power plays people engage in. There was great information that Jim could add some weapons to his armoury for when he would meet his Jack. Women, we are told are much more natural using body language then men, so men grab a book and arm yourselves. Until I bought a book and tested some of what Alan Pease had to say I was very sceptical. After I was a believer.

The next step was to help Jim understand Jack better for laying a more positive platform or scenario for his next encounter or his first attack on alleviating this miserable relationship with Jack. While Jack’s office was a garrisoned narrow pass, it was also a weakness that Jim could make use of. The office contained loads of information about Jack that Jim could use to his advantage. The strategy was for Jim to arrange a series of interactions with Jack outside of his castle or office. Jim also needed to have some interactions with his boss that were less stressful so they could restructure the relationship from boss-employee to two men seeing each other as equals doing a job.

Tactically, Jim had to move Jack onto more equal ground open ground. He also needed to have interaction with the boss that was not one on one. So the lunch room was chosen. This plan was for Jack and Jim to engage in conversation that was not work related so the relationship could grow by them getting to know more about each other. Jim was to watch for an opportunity to repackage himself from a frustrated, difficult employee into a useful ally.  Jim simply started taking his lunches so that they overlapped with Jacks. He would quietly eat his lunch and listen to whatever conversations took place to get to know his boss better. During one of these conversations, Jim learned that Jack was having problems finding someone to take over the social club fundraising and events planning. Jim waited a week and then approached Jack that he would be willing to run the social club. Jim had learned that Jack highly valued those people who take on extra non work related tasks in the work environment. By Jim learning about his enemy he saw an opening to improve his situation and thoughtfully applied himself to opportunity

By the end of the year, Jim had raised more money for the work social club than anyone could remember and had secured a very popular restaurant for the end of year social party. Jack was very impressed. Jack wasn’t the only one. Jim had become very popular and popular people hear more about others then less popular people. He heard much, not just about Jack but many others that he worked with. So in the course of running the social club Jim learned many things that he could and did use to his advantage. Sounds sinister, however Jim understood that such information was privileged and had to be used very selectively and morally. This he did. He used this knowledge to either solve problems or deal with potential problems. This ability he had was widely noticed and would reward Jim for his actions and propriety.

The two mem had learned about each other and so the relationship had to change. With Jim’s thoughtfulness and guidance, it changed for the better. Jim had slowly realised that Jack was very lonely as boss and missed light hearted interaction with those he worked with. Jim learned how to tell socially acceptable jokes and maintain light hearted conversations. Two months or so into Jims plan he was totally surprised that Jack invited him to a barbeque he was having. Slowly, both men realised they had much in common and so a friendship began to take root.

Over time Jim understood some things. First he did not know his enemy or himself as well as he thought. Secondly he was underarmed and hugely ignorant of information he needed. Lastly he understood he was fighting the wrong battle on the wrong battle field. As the year progressed, he was surprised that the better he related to Jack, the less he feared have meetings in his boss’s office. Jim discovered that Jack did not intentionally setup his office to be a ‘garrisoned narrow pass’ or decorate it to intimidate his co-workers. For him it was the best use of the space for him to maximise his performance. Jack had no idea that his office intimidated his co-workers. Instead of fighting to directly change Jack’s mind he was better off to take a more indirect route. When Jack knew Jim better, he would actually come to him for input and even advise at times. During the next year, Jack accepted a promotion in a different city and Jim accepted a promotion to another office.

Jim used other ideas from the Art of War to gain his success. He also used ideas from Body Language by Alan Pease. He now has a deep knowledge of narrow passes and how to avoid them.
Sun Tzu and Courage