The Fables of Aesops may not immediately come to mind in context of companion books, however after reading some of the articles you will understand.

​Aesop (620 – 564 BCE) , a Thracian, who wrote fables to teach about life in all its glory and ugliness. He deals with topics like character, murder, slaughter, betrayal and vanity, using animals to highlight human behaviour and traits. An unexpected combination you think at first but in reality a perfect combination.
The Doe and the Lion. ​
The Goatherd and the Wild Goats
The Bowman and Lion
The Mice and the Weasels
​More to come..... 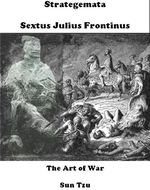 ​
​A combination of the book, Strategemata and the Art of War. Strategemata is the work of a Roman general, Sextus Julius Frontinus (40 AD - 103 AD). Written to inspire future Roman commanders. It is a collection of actions of real general of his time and before. Heroes like Julius Caesar, Hannibal Barca, Scipio Africanus and more.
Gaius Julius Caesar 01
​Gnaeus Pompeius Magnus 01
Themistocles 01
MORE TO COME.....
The Art of War for Today
An insight to the Art of War like no other!. ​﻿​
Your comments and feedback is important and valued.
FEEDBACK PAGE